Combo comes with a side of greens 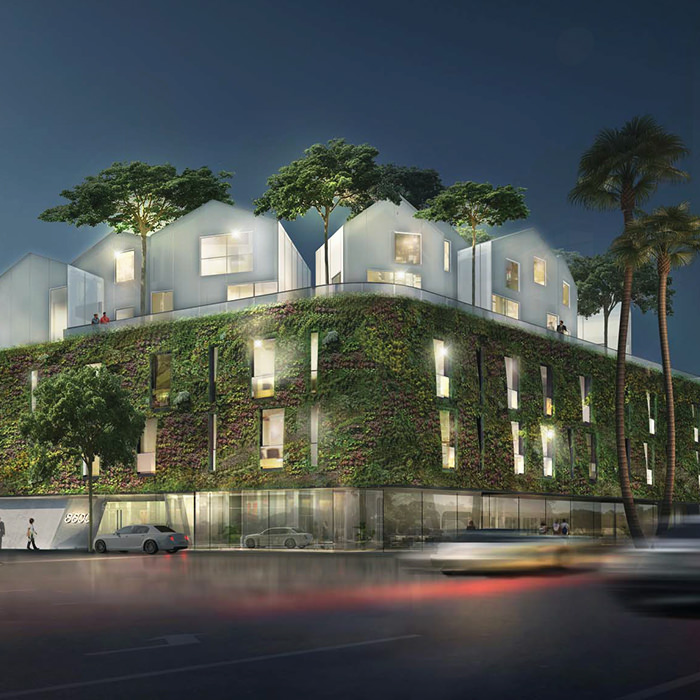 Mixed-use complex on Wilshire will offer a fresh take on the suburban lawn.

The quintessential suburban home–grassy yard in the front, house set toward the back–was the unexpected inspiration for a contemporary mixed-use residential complex being built in Beverly Hills.

“I thought, ‘Can we make a building that looks like a house, and then set it in nature, in the middle of Wilshire Boulevard?’ “ said Ma Yansong, the Beijing-based architect who is leading the project at 8600 Wilshire Boulevard.

When Ma scoped out the area before coming up with a design, he was struck by the stark contrast  between the quiet residential streets off of that stretch of Wilshire and the commercial and retail businesses on the thoroughfare.

“In modern cities, nature is so rare. Because of globalization and urbanization, every big city around the world looks similar,” Ma, 40, said. “They’re all doing the same buildings. We get tired of looking at them, and when we move our eye away from those buildings, we find beauty in gardens, trees, parks. We have to be able to put them together.”

The defining point of 8600 Wilshire will be its “living wall”–the lower exterior of the building will be covered with drought-resistant foliage and succulents.

“Living walls are popular in Europe and Australia,” Ma said. “To do them here, we are choosing desert and and native plants that don’t consume much water and will give a special texture to the building.”

The plants will be red, yellow, and green.

“It should look like a painting, where we have used the colors of the plants to create an artistic facade,” he said.

The development, Ma’s first in the U.S., broke ground in May and is scheduled to be completed in about 18 months.

He’s splitting the all-white five-story building horizontally; the ground level will hold businesses, above which will be condos and townhouses ranging from 750 to 3,000 square feet, all set around a leafy courtyard.

Slender French balconies and water features will add to what Ma describes as a “village-like” sensibility.

The building’s developers, Palisades Capital Partners, went for that approach.

It declined to divulge how much it is spending on the development, and said it had not yet set prices for the units.

“Architecture should be responsive and unique to its location,” the company said in a statement. “The design distills the imagery and magic of Beverly Hills into an iconic statement.”

Above all else, Ma said he wants to foster a sense of community–even in a modern luxury building in Beverly Hills.

In addition to 8600 Wilshire, his studio is concurrently working on a museum in Sao Paolo and his debut European residential project, an apartment building outside Paris overlooking 24 acres of greenery.