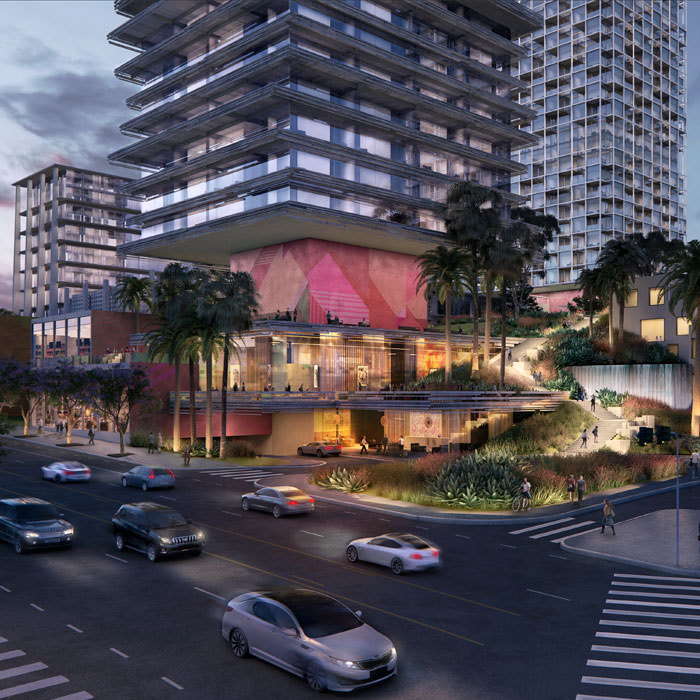 The team behind 1111 Sunset Boulevard today unveiled conceptual plans to transform the long-dormant 5.5-acre site into a modern community hub on the edge of Downtown Los Angeles. Plans for the property—the last remaining large parcel to sit vacant within the Central City North community plan area—feature residential, retail and creative office space uses, along with public open space and a boutique hotel designed by Kengo Kuma.

The plan calls for 778 residential units, a mix of market-rate and affordable, to help meet the City’s goals for new housing near job centers. Designs show low-rise bungalow style residences with a similar scale and character to the surrounding residential neighborhood as well as two high-rise residential buildings raised above the landscape, allowing pedestrians at eye-level to enjoy views of the Downtown skyline. Additionally, the project incorporates more than two acres of open space designed by James Corner Field Operations, which include terraces, gardens, courtyards, water features, and an overlook with views of downtown.

“When the project at 1111 Sunset is completed it will be part of the broader mosaic of housing in CD1 and the City of Los Angeles. This project will ensure that everyone who desires to live in CD1 has a place to live,” said Councilman Gil Cedillo, who represents District 1.

Neighborhood-serving retail along Sunset will be accessed via a new sloping walkway reminiscent of William Pereira’s plan for the former Metropolitan Water District campus that once occupied the site. New pedestrian access points along the perimeter of the site will also make it easy to access the open space amenities. By creating vibrant streets, the property will create more meaningful connections with surrounding communities.

“Our team was drawn to this property because of its strategic location on the edge of Downtown within a mile of dynamic neighborhoods like Bunker Hill, Echo Park and Chinatown,” said Brian Falls of Palisades. “Our conceptual plans embrace the site’s adjacency to these vibrant areas by enhancing the pedestrian experience, promoting public transit, and encouraging an abundance of community uses.”

Kuma, one of Japan’s foremost architects and architectural scholars, joins the architectural team that includes Skidmore, Owings & Merrill (SOM) and James Corner Field Operations. Kuma complements the design team with his architectural philosophy, which focuses on the importance of light, materials, transparency, and a fundamental respect for a building’s surroundings and context. This will be Kuma’s first major project in Los Angeles. The firm’s other projects in the United States include the Portland Japanese Garden and the Dallas Rolex Tower. Construction has begun on Kuma’s design for the Tokyo 2020 National Olympic Stadium in Tokyo.

“Our firm is honored to join the design team tasked with unlocking the potential of this unique property,” said Kuma. “We are eager to draw inspiration from the site’s rich history and the surrounding neighborhoods to create a hotel that will not only showcase this world-class location but also contribute to the dynamic community that is Los Angeles.”

San Francisco-based Natoma Architects, led by Stanley Saitowitz, also joins the team. Natoma brings to the project an approach focused on architecture’s systemic relationship with the city. Saitowitz is a celebrated architect with significant experience designing mixed-use and multi-family residential projects including 8 Octavia in San Francisco.

The L.A.-based SOM team is led by Design Directors Paul Danna, FAIA, and José Luis Palacios, AIA, who have an extensive track record with ground-up development projects throughout Southern California. SOM is leading the overall design, with a focus on the residential, office and retail uses. The open space areas, landscape and other public spaces will be designed by a team led by James Corner, Founder and CEO of James Corner Field Operations, the landscape architecture firm behind the High Line in New York City.

Los Angeles-based real estate firm Palisades and the architectural team look forward to working with the community as the plan continues to take shape throughout the public review process. The renderings unveiled today are part of an application package that kicks-off that process.

For more information and to stay informed, please visit the project website at 1111sunsetblvd.com.