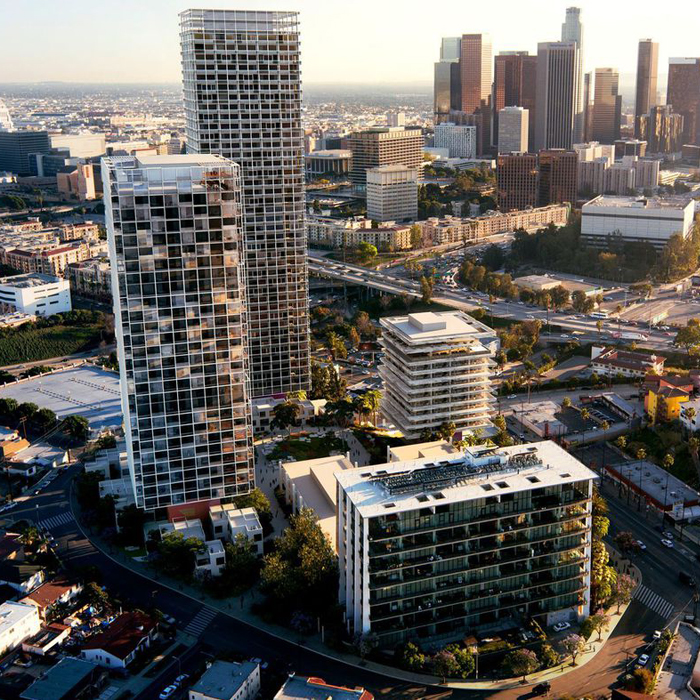 A large-scale residential and hotel complex will be proposed for the former headquarters campus of the Metropolitan Water District on Sunset Boulevard as Los Angeles’ development boom expands into blocks just northwest of downtown.

Los Angeles developer Palisades is expected to file an application with city officials Thursday to build the project on 5.5 acres between downtown and the entrance to Dodger Stadium.
Palisades was drawn to the site because it is zoned for substantial development and is near Chinatown, Bunker Hill and other dynamic neighborhoods, said Brian Falls, vice president of development for Palisades.

Falls plans to make entrances on several sides so pedestrians can pass through and reach transportation on Sunset Boulevard.

“It’s pretty much a walled-off fortress from the street now,” he said.

The design calls for shops and restaurants along Sunset at the base of a new sloping walkway, which is intended to evoke the mid-century aura of architect William Pereira’s 1960s concept for the MWD campus.

Planners in that era commonly designed big developments, such as the MWD headquarters, the Western Bonaventure Hotel and former Macy’s Plaza (now the Bloc) in downtown Los Angeles, to be inwardly focused oases. But openness to the sidewalk and urban bustle is in vogue today and the designers of 1111 Sunset say their intention is to create a new neighborhood hub where people can stroll or relax.

“It’s all about permeability,” said architect Paul Danna of Skidmore, Owings & Merrill, who is helping oversee the design.
One of the design challenges was the 60-foot drop in grade from the top of the property to Sunset Boulevard, Falls said. He hopes the slope will become part of its appeal.

“Downtown has a lot of flat blocks,” Falls said. At 1111 Sunset there would be paths, terraces, gardens, courtyards, water features and an overlook with views of downtown.

The complex would have high-rises and low-rise bungalow-style residences meant to have a similar character to the surrounding residential streets, he said.

The 98-room boutique hotel is to be designed by Kengo Kuma. It would be the major Los Angeles project for the high-profile Japanese architect known for melding his structures to their natural surroundings. The hotel would be 17 stories high and include a restaurant.

“We are eager to draw inspiration from the site’s rich history and the surrounding neighborhoods to create a hotel that will not only showcase this world-class location but also contribute to the dynamic community that is Los Angeles,” Kuma said in a statement.

The architect’s twisted Rolex Building in Dallas and the New National Stadium for the 2020 Olympics in Tokyo are under construction. Los Angeles architecture firm Skidmore, Owings & Merrill is leading the overall design of 1111 Sunset, which calls for nearly 1 million square feet of development. That includes two residential towers of up to 31 and 49 stories, which would contain a combination of 778 apartments and condominiums. The developer would set aside 76 of the rental units at a subsidized rate for low-income tenants.

Palisades acquired the property in 2015 out of bankruptcy proceedings after former owner Holy Hill Community Church reorganized under Chapter 11 of federal bankruptcy laws. The site has been only lightly occupied since the MWD, which provides drinking water to six southern California counties, moved downtown in 1993.

The former MWD campus has seen many changes over the years. An eight-story office tower added in 1974 is now a 96-unit apartment building called the Elysian that opened in 2014.
The old MWD structures have been significantly altered and were denied historic landmark status by city officials, the developer said.

More project construction outside of downtown can be expected as expansion there makes nearby sites increasingly attractive, said Con Howe, former city planning director.
“Areas adjacent to downtown that haven’t seen any good new development in many years can expect to see some,” said Howe, who is now a managing director of housing developer CityView.

Also in the 1111 Sunset neighborhood development pipeline is a 204-unit apartment and retail complex just to the west at Sunset and Everett Street that would replace unoccupied retail structures and some residences. Canadian developer Aragon Properties recently filed a final environmental impact report on the planned project it calls Sunset & Everett.

Palisades will also have to file an environmental impact report on 1111 Sunset’s potential effect on traffic, local aesthetics and other issues. A public comment period would follow and, if approved, the complex could be completed around 2023.

The proposed developments are on the eastern edge of Echo Park in a hilly neighborhood called Victor Heights. It backs up to Elysian Park, the city’s second-largest public park and neighbor to Dodger Stadium.Victor Heights is named after Victor Beaudry, a water mogul who was the younger brother of Prudent Beaudry, the 13th mayor of Los Angeles.

In the 19th century, the oval-shaped parcel where the former MWD headquarters lies was Beaudry Park and later Sisters Hospital, historian Greg Fischer said. The Catholic hospital later became known as St. Vincent’s Hospital and moved to 3rd and Alvarado streets. The MWD occupied it in 1963. City Councilman Gil Cedillo issued a statement supporting the project proposed in his district, in part because it would create more housing.

“The 1111 Sunset development will provide a new entryway into our Echo Park community,” he added. “Along with other renovations in the area, it will provide much needed community improvements and bring a host of new services to the people in that community.”